Happy New Year! I hope everyone is having a good one so far and staying healthy.

After a progressively dryer fall and early winter, rains in the first week of the year have put Neuse River flows at near normal levels (at least based on flows at Kinston, the USGS gage at Fort Barnwell is still not reporting). The salt wedge had been upstream of station 0 at Streets Ferry Bridge back in December but is now somewhere just upstream of New Bern between stations 20 and 30. This location for the tip of the salt wedge is still unusually far upstream for January, and the estuary in general is still much saltier than normal with downstream salinity at about 20. Suspended sediment from the high river flow is apparent as a region of elevated turbidity (> 20 NTU) at the upstream, freshwater stations that gradually diminishes in the surface waters downstream to station 70. Dissolved oxygen conditions were normoxic or supersaturated throughout most of the estuary. A slight dissolved oxygen sag was evident in the bottom water at the tip of the saltwedge at station 30 but the levels of ~6 mg/L are sufficient for estuarine animals. Generally, chlorophyll fluorescence was low (<10 ug/L) but a subsurface zone of elevated chlorophyll (~20 ug/L) occurred at stations 60 and 70 at ~ 1 m depth. It’s likely that this is the beginning of the annual Prorocentrum minimum bloom, a dinoflagellate that is considered harmful to some shellfish but hasn’t been shown to cause problems in the Neuse. With the recent nutrient inputs from elevated flows, the bloom size and intensity will likely increase over the next couple of months. Next time I’ll look at samples and take some pictures. 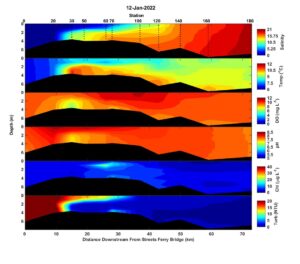