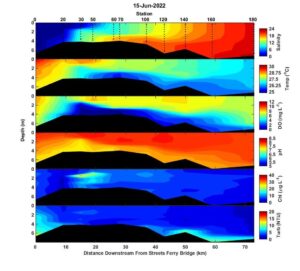 As I’m sure you’re all aware, it’s still really dry. The Neuse River flow is less than half its seasonal norm. Salinity is still high along the estuary and salinity is >20 in the surface waters near the mouth. The tip of the salt wedge is still upstream of New Bern. The estuary is moderately stratified with surface to bottom salinity differences of ~8 at station 30 to ~ 2 at station 180. Warm bottom water temperatures (> 25 C) and stratification promoted hypoxia (< 2 mg/L) from stations 30 to 120 and even the lower stations had bottom water DO < 4 mg/L. A small subsurface maximum of chlorophyll a occurred along the pycnocline at ~ 1.5 m depth at stations 30 and 50. Microscopic examination of station 50 surface water revealed a phytoplankton community dominated by the summer bloom forming dinoflagellate, Levandarina fissa (formerly known as Gyrodinium instriatum). Its not known to produce toxins and hasn’t been associated with fish kills.