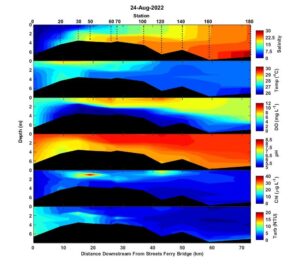 Flows on the Neuse River have increased some and have fluctuated around the seasonal norm since the beginning of August. The estuary is still really salty though. Surface water salinity at station 180 was 24.2, a 99% value for the ModMon dataset. The recent modest freshwater inputs haven’t changed that situation much but they are helping to maintain strong stratification in the upper parts of the estuary. From station 20 to 70, surface to bottom salinity differences are about 10 and the bottom waters are anoxic. The crew reported a strong sulfide smell and the water in sample bottles was bright orange from oxidation of free dissolved iron. There was a broad zone of elevated chlorophyll from station 30 to station 120. Throughout most of this zone, the chlorophyll maximum occurred at 1 to 2 m depth. At station 120, the maximum was at the surface. I examined samples from station 50 and 120. Station 120 had a typical mixed bag of cryptophytes, small diatoms, and several medium to large dinoflagellates including Scrippsiella trochoidea, Levandarina fissa (aka Gyrodinium instriatum), and Pheopolykrikos hartmannii. Station 50 was dominated by tiny, ~4 um diameter centric diatoms, but also had a few Levandarina fissa, cryptophytes, and small chlorophytes. Turbidity at the head of the estuary was about 7 NTU. At station 30 and 50 there was a zone of elevated bottom water turbidity with a subsurface turbidity maximum > 10 NTU along the pycnocline. This happens occasionally when the bottom waters are truly anoxic. I think it results from chemical precipitation of reduced iron as oxic and anoxic waters mix.

I hope everyone enjoys a safe Labor Day weekend.